I worked with university students for a while. I can remember reading over an essay for an overseas student once to check his grammar. It was an economics essay from memory. It was full of unnecessarily big words! Even more than a subject like economics would normally use. It was as though he had gone to the thesaurus and picked the longest equivalent word in the list and put that in his essay. I challenged him on it, and said ‘Why have you said it that way when you could have just said this? Because this is all you mean isn’t it?’

It was a conversation between an English Graduate and a commerce student with English as a second language. But he didn’t understand that if something can be put simply, that is probably the best way to put it. He made the assumption that many people who are not trained to write make. He thought that the longer the word, the more impressive and important things will sound… The more likely that the essay will get a good grade, because the marker will think this person must know what they are talking about, because look at the words that they are using! …Big, long dictionary words.

But that is actually not so. Unless it is a French vocabulary test it’s the thought that matters more than the words.

In the English speaking world the most important things are usually said with words of 3 syllables or less.  And one of those words, one of the most important, is ‘Love’. Four letters, one syllable, but with more meanings and nuances than we will ever know. ‘Love’.

As Paul turns towards the end of his letter to the Roman Church to give advice on how they should live as a Christian community, how they should relate to one another and to the wider community beyond the church this little word, ‘love’ and its practical implications crop up again and again.

In the first part of our reading he makes a point that is similar to the one that I have made about the short word for something being the most important. He refers to the Jewish law and its many commandments stretching over whole books in the Bible, and he says, ‘Look, this is what it all boils down to… This one overarching commandment, ‘Love others as you love yourself’. All the complexity of the law, and chapter after chapter of the law, can be summed up in this short word, ‘love’. It is all that the law demands. Love. In your life together, this is what you owe one another. Love.

Paul goes on to encourage the church members in Rome to be up and active when it comes to living out their Christian faith. He reminds them that they are part of the new thing that God is bringing into the world through Jesus Christ. They are part of the coming dawn. They need to let their lives be defined by that rather than by the night that is coming to an end… the night where deeds are characterised by selfishness, and abusiveness, disrespect, quarrelling and jealousy.

Now we may want to argue with some of this light and dark language. We might want to point out that the night is not completely black, that those who say they belong to the light are not without their darkness and that the promised dawn is a long time coming. But those arguments do not get us off the hook with the central challenge of what Paul is saying. Yes there has always been some light in the darkness There is a strong biblical tradition that the whole world is God’s and that God’s Spirit ‘blows both inside and outside the fences’ (J.K. Baxter). And yes the people of God don’t have a clean record, apart from being in Christ. And yes the dawn has proved to be further away than anyone in the early church envisaged.

But to live mostly by self- interest, to think that the meaning of life is to have more and more things, to be ground down by work, to not know the freedom that comes through knowing the love of God, to treat others as less than human, to live in fear, to believe that might is right, to trash the earth, to give no thought for others or for tomorrow… Surely these are forms of darkness or blindness. This is the sort of night that Paul says is coming to an end. Sad, dark, dangerous ways of living together that even many modern pundits are warning must come to an end, saying they are undesirable and unsustainable.

The word apocalyptic means something that is revealed or disclosed. The Christian faith is an apocalyptic faith. It is focussed on a future that started with Jesus Christ and is still in the process of being fully revealed. But what will be revealed will be in keeping with what Jesus talked about when he talked about God’s Kingdom. It will be in keeping with the life he lived. So Jesus is not only the beginning of this revelation of God’s new future, he is the pattern for it as well. He is our pattern… a pattern of self- giving love.

And so, when Paul encourages the Christians to live as though the future is here, he tells them to keep the Lord Jesus Christ close, as close as the clothes on their backs. Jesus is their model and their guide into God’s future – a future that operates in a very different way to the politics, social norms and expectations of the great city of Rome where they lived and worked…. A future that operates in a different way to greater Wellington where we live and work. Keep Jesus close Paul says, then you won’t be so easily side tracked by your own selfishness.

Our reading this morning ended with Paul tackling an issue that divided the Roman church, about whether it was alright to eat meat or not. If the meat was sold at the market place there was no way to know how and where the animal it came from was killed. That meant that it may have come from a pagan temple. Some were very bothered about this issue and others not much at all. Paul’s response is interesting. ‘Learn to live with your differences’, he says. ‘Do what your conscience tells you and allow others the space to do what their conscience tells them. Don’t be critical of someone because they don’t share your way of looking at things. God has welcomed them and so should you.’ Just as Jesus is the pattern for the Christian life, God’s hospitality to all sorts is the pattern for the Christian community.

Paul makes it clear then that if you are going to be part of God’s future today the way you do things will be challenged. Jesus’s pattern is not a focus on oneself but a focus on others. God’s hospitality is not just toward a particular group that mostly believes the same. God welcomes people who are like us and people who are not at all like us. And when we find that hard to handle it is not God that needs to change. 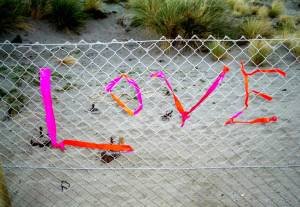 That word love is a simple, sweet sentimental little word from a distance. But up close and personal it has the power to challenge us to the core and change us. It is a tough word that pushes us out beyond ourselves to engage honestly and humbly with others. And we will begin to recognise that people say love in all sorts of ways… that some of them have perhaps been saying it to us all of our lives even though they hardly ever spoke the word out loud.

It is a word that will take us to our limits. It is a word that will force us to lean on God, because only then will we have the strength to love as God has loved us. If we take that track we will learn again and again that God is love. And that that love is spoken to us through other people, through mercies on the way, through the beauty and the steadying rhythms of the world around us. And sometimes we may even catch sight of the way that God has spoken love into other’s lives through us.

‘Love others as yourself’. ‘Be ready to live in the light.’ ‘Let The Lord Jesus be as near to you as the clothes you wear. Then you won’t act selfishly’ ‘Welcome all the Lord’s followers…. After all, God welcomes everyone.’ Love…. Practical love. It all boils down to love.