You know the story of the Emperor’s new clothes.

The Emperor was a very vain man.  He loved fine clothes.  A parade was coming up on his Imperial calendar; it was time to get a new outfit.  So tailors were invited to come up with something that was fit for an Emperor. 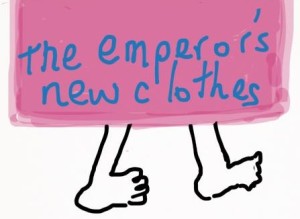 Two confidence tricksters, who knew of the Emperor’s vanity and his love of clothes, came forward.  They told the Emperor that they could produce a set of clothes for him that would be so fine and exquisite that those with common eyes would not even be able to see them.  Only those whose tastes were noble and refined, like the Emperor’s, would be able to appreciate them.

Well that well and truly appealed to the Emperor’s sense of superiority, and the two tricksters got the job.  They insisted on working in secret, and they frequently came back to ask for money for this material or that.  It was turning into the most expensive set of garments the Emperor had ever had made.  ‘Still,’ the Emperor reasoned, ‘that was to be expected given the exquisiteness of the outfit.’

Finally the day to try on the outfit arrived.  With great anticipation the Emperor entered the fitting room.  But to his horror when the tricksters displayed what they said was the outfit the Emperor couldn’t see it.  They made a great show of helping him into it.  Smoothing a wrinkle here, removing a thread there, and they pronounced it a perfect fit.  The Emperor looked at himself in the mirror.  It was not any more visible to him with the mirror, than it was without it.

The Emperor is a snob, and he is caught by that.  He is too embarrassed to question what he is being told by the tricksters, because that might mean admitting that he is too common and unrefined to see what they are telling him is there.  And what if members of his court can see them and he can’t?  That would mean that there were people in his court who were more noble and refined than he is.  So he acts as though he can see them.  And he goes in the parade wearing his wonderful new costume, which is so exquisite that only those of noble tastes can see it.

And his entire court goes along with it.  They are either as snobbish as he is, or they are aware of who pays their bills.  And so the parade goes on, until a child who has no social etiquette whatsoever, nor any political sense ….  a child who is not afraid to trust what his eyes tell him, asks his parents in an over loud voice, ‘Why isn’t the Emperor wearing any clothes?’

And so the child becomes the truth teller for the crowd and the Emperor.  He gives permission to the people to acknowledge what is in front of their eyes.  He may be watching an Emperor, but that child is, at that point, the most powerful person on the street. 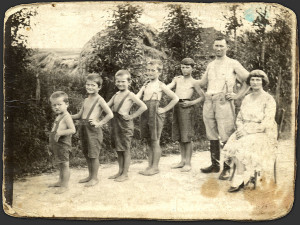 Have a look at this photo.  It illustrates a social and family expectation.

It is telling us that these boys are miniatures of their Father.  They are dressed like him; they stand in the same pose as him.  They are growing into him.  (If there had been girls, perhaps they would have sat on the near side of their mother on chairs that got progressively smaller).

Remember the boy in the story who told it as he saw it.  Remember the times when children, whom you know, have done that.  Do not discount the wisdom that is sitting there in your children and grandchildren, your nephews and nieces and great nephews and nieces.  Let’s not make the mistake of thinking that we are the only ones with things to teach.  That they are empty containers waiting for all our knowledge and wisdom.  That they are somehow meant to echo everything that we think and so reassure us of our conclusions and our prejudices.  God did not give us our children to make them into miniatures of ourselves.

Yes we will undoubtedly shape them, and they may end up having interests and views of life and of God that are not far different from our own….  Or they may not.  For those who keep an eye on children, one of the hardest things to learn and relearn is that those under our care need the freedom to make their own journeys at their own pace.  To allow someone that freedom is an act of love.

We are not the same people as we were at 5 or 15, or for the older among us, 25, 45, 60…  We need to allow others that same privilege of growth and discovery.  If we do that we may be in a place to make some discoveries of our own, through them.  Remember the boy in the story.

It is quite possible that the children whom we rub shoulders with, may grasp a part of the truth that we have never noticed or have long since forgotten.  Their journey may encourage and inform our own.

The story of the Feeding of the 5000 is found in all four gospels.  John’s account is the only one that mentions the boy.  The other gospels just give a count of the loaves and the fish.  John’s mention of the boy is responsible for turning this story into the Sunday School lesson favourite that it has become.  This is a story that is frequently used to teach our children that even children can do helpful, kind things (which is true, children can do kind and helpful things, and we would want to encourage them to do so).  However we don’t want to be eyeballing the children to let the adults off the hook.  You see the real barb in this story is for the adults. 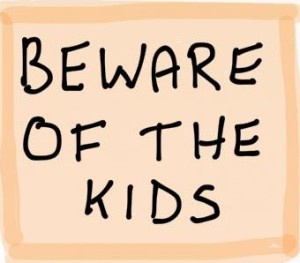 Let’s have a think about that boy in the Bible.

Did Andrew see him nearby and notice his lunch box?  Or had the boy wormed his way through the crowd (as children are good at doing)?  Was he watching, and did he overhear Jesus and the disciples conversing and so offer what he had to Andrew?

The story doesn’t tell us.  But when Andrew, the disciple, draws attention to the boy, Andrew doesn’t do it because he believes it is the solution to the catering problem.  He does it as a possibility to be discarded.  ‘There’s a boy here with 5 little loaves of barley bread and a couple of fish.  But what good is that with all these people?’  It is a bit like saying, ‘well we could go that way, but we know that just around the corner the bridge is out, so we wouldn’t get very far.’

But even if Andrew didn’t see it as a solution, I think that the boy may have offered it as a solution.  Interestingly, Jesus takes it as one, or uses it as the basis for one.  This is a subversive story.  The gospel readings talk about a crowd of around 5000 men.  They don’t count the women and the kids, though we know that women were among Jesus’ disciples and this boy indicates the presence of children.  It was a mixed group of varying ages who had come out to hear Jesus.  Around 5000 men in that crowd, but the germ of a solution has come from one of those who weren’t counted.  It has come from a child.

It can be foolish and arrogant to discount the ones that don’t count.

Beware of the kids….  The ones that tell it like it is, that tell the truth….  The ones that observe and wonder….  The ones that aren’t put off from doing or suggesting something because the grownups think it is impractical.  If you want a staid and settled life instead of a continuing journey, watch out for those kids.