A Service with the BB Learners’ Band.

As most of you know I’m a bit musically challenged.  I inherited this characteristic from my father.  My dad was the non musical one in a family that produced some quite good musicians.  But although my dad couldn’t keep a tune he loved listening to music – classical music.

Anyway, maybe once a year dad would take himself and a particularly favoured child or two off to a symphony orchestra concert at the Dunedin Town Hall.  It was a pretty special occasion.  We dressed in our best and stayed up much later than we were normally allowed.  One time we went to a Royal concert put on by the NZSO in 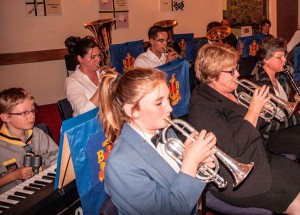 the Town Hall and attended by the Queen and Prince Philip.  The Town Hall was very full.  We had seats way up in the Gods.  For the uninitiated that’s as far back from the stage as you can get.  So we were a very long way from the orchestra and a long way up.  We did however have quite a good view of the back of the Queen.

It was by my dad’s side that we were exposed to the mysteries of the orchestra.  It was pointed out to us where the strings sat, and the woodwind and the brass and perhaps best of all the percussion with its highly polished timpani drums.  We would listen as the musicians tuned their instruments.  We learned that the Leader of the Orchestra was the leader of the first violins and that when s/he entered the conductor was not far behind.  The air was full of anticipation and excitement at that point, the performance was about to begin.

We learned to watch the percussion section at the back of the orchestra.  Among the drums there might be a glockenspiel.  Sometimes there was even a gong.  As the volume of the music rose we would look to see whether this was the time that someone from the percussion section would stand up and come forward to be at the ready to strike the gong.  The triangle was another instrument we would watch.  The strings and the wind instruments keep everything going; they are the workhorses of the orchestra.  But there are times in music when a note is required from the gong or the triangle, no other instrument will do.  It’s true in life too, isn’t it?  Sometimes the voice that is hardly heard, at the right time says it the best of the lot, or it seems to sum up all that has been said before in a few succinct words.

A Couple of Words

Now I have just demonstrated that I’m not a musician.   I have talked more about the spectacle and drama of the orchestra, but the musical among you will want to set me straight – ‘Yes…  Yes… but it’s first and foremost about sound, about the music, not the spectacle.’ And you are right.  The orchestra (and the composers if they were still around) would agree with you.

Music affects us all.  But particularly for those who are musical, it is a direct route to the soul.  It speaks to our emotions.  The right piece of music has the power to cut through all that’s on top and to move the person who is sensitized to it to tears with its beauty or its pain or its truth.  The other day one of our musicians here told me ‘music is a mysterious energy.  It affects you emotionally and even physically and no one quite knows how.’

You can find a contemporary witness to the power of music at http://www.musingonmusic.com/

The following is a music blog by Keoni Lewis.  He writes:-

I attribute music with helping to ‘raise’ me in a cold world.… it drove me to be expressive and achieve a level of creativity I was unaware of….  Music has helped me discover who I am.  Assisted me through some of the darkest times in life.  Gave me insight to relationships.  Softened my approach to life in a time when I hardened myself to fight life.  Without music, I fear my mind, heart and soul wouldn’t have developed as it has, and I would be another cog in the vicious cycle of a violent upbringing.’

People have understood the power of music for 1000’s of years.  The word music comes from Greek.  It comes from the word Muse.  The muses were the Greek goddesses who inspired creativity.   So in Greek thought music was something inspired.  It was something that came from beyond us and was breathed into us.  It was a divine gift.  Certainly the musicians worked at their art and practiced, but there was a realisation that when music did its magic the results were more than the sum of what went into it. 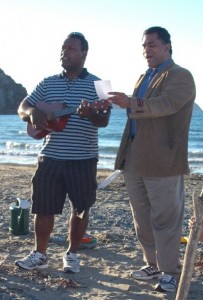 Our Jewish and Christian heritage also regards music as a gift of God.  It is a gift that has always played an important part in our worship.  The Bible is full of songs and poetry.  At its centre there is a songbook with 150 songs- the book of Psalms.  There are songs in this book that are 3000 years old.  Some of them have notes about the tune that they were to be sung to, though the tunes themselves have long been lost.  …To the tune ‘A Silent Dove in the Distance’, to the tune ‘Don’t Destroy’, to the tune ‘Lily of the Promise’….

There are other songs too that are scattered throughout the Bible particularly in the Old Testament or Jewish scriptures.  The one that was read this morning (2 Samuel 1:17-27 ) is one of those.  It is a lament.  David’s response to the news of the death of his good friend Jonathan and Jonathan’s father, King Saul, is to pick up his harp and compose a song in their memory – a song that everyone can sing and so remember two of Israel’s heroes.  It is a song that is included in a song book called the Book of Jashar.  My bible translation has a note saying that this book may have been a collection of ancient war songs.  David calls the song, ‘The Song of the Bow’.  It is a beautiful, poignant song.

‘together in life, together in death,
they were faster than eagles
and stronger than lions’….
(Good News Bible)

The songs that are in the book of Psalms and those scattered throughout the Bible are about all sorts of things.  Some are laments, some put Israel’s history into song, some give instruction, some are prayers in desperation, some are hymns of praise to God, some glory in the beauty of the created world, some are royal prayers as a new king is enthroned, some are love songs, some are angry and keen on revenge and some are full of joy.  The whole of life is there – the beautiful and the ugly- and through music it is gathered up and brought before God and hallowed or at least brought into a place where it can be redeemed and changed.  Collectively these ancient songs teach us that nothing and no one is out of bounds.  We are all in the reach of God.

So that is music, a gift from God.  I want to say something briefly about the word ‘instrument’ since we have quite a few of them here this morning with the Boys’ Brigade Learners’ Band.

Instrument comes from a Latin word which means to set in order, to make ready, prepare, equip or instruct.  An instrument is something that equips us to do a task.  It is a tool or an implement.  And the tools that the band has with them today- well strictly speaking they should be called musical instruments to distinguish them from scientific and other instruments, 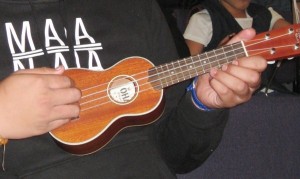 tion, wind or percussion.  Musical instruments are pretty much like any other instrument- they are things that are used to perform a task and they are useful to the extent that they do what they are made to do.  Sometimes of course if there’s a botch up it’s not the fault of the instrument but its handler- it’s the handler that needs training and practice and the commitment to persevere.

I started this sermon with the picture of an orchestra.  It strikes me that an orchestra is a great image for the community of God’s people.  God has composed the music and God is our conductor.  We are there with our different instruments learning how to play the music God has given us, and learning how to play it together.  As we learn to do that in our worship and our living the whole will most definitely be more than the sum of the parts.  Together we will be swept up into God’s symphony and carried along in it.  The result will be something of beauty and mystery.