We have photos of our boys beside some place name signs in the Cotswalds in the U.K.  –Upper Slaughter and Lower Slaughter.  On one the oldest is pretending to throttle the younger and on the other the youngest is pretending to throttle the older.  Evidently the name Slaughter has nothing to do with butchery or battle.  It comes instead from an Old English word, Slohtre, which means a muddy place.

What weird and wonderful place names have you come across? 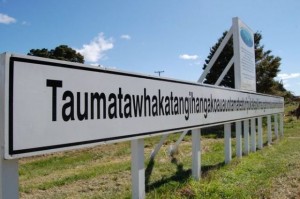 Signpost with the longest place name
in New Zealand and possibly the world.
It means- the place where Tamatea, the
man with the big knees, who slid,
climbed and swallowed mountains,
known as ‘landeater’ played his flute to
his loved one.

Places receive their names for various reasons.  Sometimes they are named because of a family that lived there, sometimes after an eminent person, sometimes because of an industry or after an event.  Sometimes they get their name from a geographical feature.  Sometimes places are named in a more hit and miss way.  A person in a planning office has the task of coming up with a whole batch of new street names, and the only constraint is that they can’t use a name that has already been used elsewhere, so as not to confuse the Fire Brigade.

Our Bible passage this morning is, among other things, about the naming of a couple of places.

It follows a very nasty episode in Shechem, where one of Jacob’s daughters is raped by a man fron one of Shechem’s leading families.  A peace of sorts is brokered.  However the brothers of the woman who was raped are not happy with what was negotiated.  So they attack the town when the men are off guard and sore (part of the peace deal was that the men of Shechem would be circumcised).  These angry sons of Jacob kill the men and loot the village.  The father understands that this act of revenge puts the whole family in jeopardy.  The brothers only see that their sister was wronged and someone needed to pay, and what do they care if it was the whole village.

Jacob had bought land around Shechem, intending to settle there.  Now it was certainly not safe for the family to remain in the area.

Into this situation God speaks to Jacob, ‘Go to Bethel at once and live there.  Build an altar there to me, the God who appeared to you when you were running away from your brother, Esau.’

So Jacob is summoned back to a place where he himself had previously encountered God and found hope, long ago when he was escaping the consequences of his own skulduggery.  Bethel is the place of Jacob’s ladder.  It is the place where Jacob hears for himself the promise that God has made to his family- the promise of the land he lay on, and descendants as numerous as specks of dust.  Through Jacob and his family every nation on earth will be blessed.  Then there is the personal promise, ‘Remember I will be with you and protect you wherever you go, and I will bring you back to this land.  I will not leave you until I have done what I promised.’

To this doorway to the house of God, the gate that he felt opened into heaven, Jacob brings his family, escaping from trouble and danger that they have had a part on bringing on themselves.  Yes, Jacob orders his family to purify themselves and leave behind the vestiges of foreign gods, but Bethel is not shrine for the lily white.  It is a place where sinners, those with murky lives, meet God and are reminded of who they are and the promise they stand in.  It is a place where the frightened find hope.

The account of Jacob setting up the altar at Bethel here in chapter 35 is one of two versions found in Genesis.  The first is found in the Jacob’s ladder story in chapter 28.  There Jacob upends the stone he was using as a pillow, as a memorial stone.  The accounts in both cases are very similar.  The upshot of both is that a place that once was known as Luz, is now known as Bethel, (the house of God).  Something has happened there significant enough to change a place name.  This is a God place now.

There is another place naming in this passage – a poignant one.  Rebekah’s nurse, Deborah, dies near Bethel.  Whether she was Rebekah’s own nurse as she was growing up , or the wetnurse who looked after Rebekah’s first son, Joseph, we don’t know.  But she was someone close to Rebekah, and a loss.  They buried her beneath one of the big trees below Bethel.  (Most translations have oak, but the Hebrew word means any stately tree.) The spot became known as Allon Baccuth – the Tree of Tears.

Through our services over Lent we are looking in a more focussed way at some of the stories of this area.  I’ve been doing some reading around this from the Tawa /Porirua section of the library and I’ve come across some interesting place names and sometimes the stories behind them.  I thought I’d share some of them with you.

The block of land that runs down to the Plimmerton bridge, Section 98 on the first subdivision, was bought by a man called Henry London.  It was the site ofLondon’s accommodation house and his store and a wharf.  Local Maori called it Tinipia.  Large numbers of Maori would call atLondon’s trading potatoes and maize and pigs from settlements in the bay and along the coast.  Henry London used to brew ginger beer, and it was very popular with the Maori who came to trade.  That is why they called it Tinipia (a Maori transliteration of ginger beer).

Had I been a sailor I might have known about this next one before now.  There is an underwater feature called The Bridge.  It runs from the creek valley on Mana Island to the mainland at Bridge Pa, a bit south of Titahi Bay.  Evidently around 8000 years ago Mana Island was part of the mainland.  The shoal or Bridge is all that remains of that connection.  On either side of the Bridge the depth of water can be 2-4 times deeper than the depth of the water on the shoal itself.  The deepest sounding on the shoal is 4.5 fathoms.  Immediately south of the Bridge the water can be as deep as 20 fathoms.  The shoal is an underwater bridge that creates a stretch of shallow water.

One last one will appeal to your sense of humour.  On the harbour side of Paremata Railway Station there was a rag tag collection of cottages along the shore of the harbour.  They disappeared when the motorway was realigned.  They were mostly fisherman’s cottages.  Sometimes on a high tide the sea would wash under them.  They were pretty primitive.  The area was sometimes called Slum Alley or Slug Alley, but it came to be known as Hobson St.  Hobson St in Wellingtonw as a posh street.  Hobson St in Paremata was a joke that stuck.  It is said that some of the Paremata residents were skylarking around Wellington one night and they brought back a souvenir- one of the signposts from Hobson St.  They erected the sign on their own home ground.  The name stuck, and by 1948 had become official.

The names Jacob gave to places reflected what had happened there… Bethel (House of God)… the Tree of Tears.  The place name was a way of remembering.  I want to give you a minute to think of a place that you have lived in or perhaps spent a lot of time working in.  It might be a whole town.  It might be a street or just one building.  Think of the place and the learning that went on in that place….

Forget about the name that that place already has – forget about Luz or Stalag 13 or what ever it was called- and give it your own name, as Jacob did.  What would your name for it be?

What is the prayer or thanksgiving bound up with that name and that place?