A few years back I did a course that meant that I had to travel to and from Palmerston North every four weeks or so.  There were four of us from Wellington doing the course (one lay person and three ministers) and we got into the practice of car-pooling.

It had been raining one day as we left Palmerston North and then the sun had broken through and we were treated to a magnificent rainbow.

We all admired it, and then we became absorbed in our conversations.  I was in the front with the layperson and I found out that she had a B.Sc.(Hons) in Zoology.  While working for the Wildlife Service she spent time working for her supervisor on a project trying to get some idea of the population and range of Whitaker’s skink.

I’m not sure whether you’ve heard of Whitaker’s skink, but you may have noticed that as you come into Pukerua Bay, the sign announcing the settlement has a lizard on it. 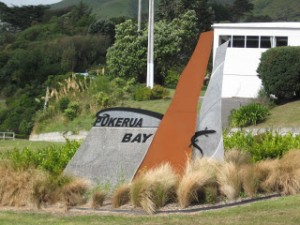 That lizard is a depiction of the Whitaker’s skink. Old skeletons of  Whitaker’s skink have been found elsewhere in the North Island, indicating that the lizard was at one time more widely distributed, but Pukerua Bay is the only place on the New Zealand mainland where they can still be found.  There are a couple of colonies of the skink on some of our reserve islands off the Coromandel Peninsula.

The skink is an elusive creature that likes humid conditions.  It forages in the early evening and it prefers temperatures around 15 – 20 degrees C.  It has been found in seabird burrows (you can imagine how slick they are), between the boulders of stable scree slopes and in leaf mould.

My travelling companion’s task was to set and check lizard traps.  She would identify any lizards caught in the trap and count them.  I asked her how she knew that that she wasn’t counting the same lizard over and over again.  Lizards squeeze through tight places and our New Zealand lizards are small creatures, so it wasn’t an option to use a ring or tag it.  I was told that when they caught a Whitaker’s skink they would clip a toe to identify it as one that has been counted.  Evidently it caused the skink no discomfort and it had the great advantage of not hampering its movement.

Whitaker’s skinks are on the vulnerable list of New Zealand fauna.  Even at Pukerua Bay they are rare.  In a survey in the 1990’s, similar to the one my colleague participated in, of just over 2600 lizards caught in the area only 78 were Whitaker’s skinks.

So the talk in the front of the car was all of conservation, and the talk in the back of the car…?  Well they were ministers, it was of pastoral matters.  They were seeking one another’s wisdom on pastoral issues, wrestling with how best to care for those who were under their care.  I don’t know more than that.  It wasn’t my conversation.

On a number of occasions I looked out the window and that rainbow was still with us.  Here we were caught up in two separate conversations – one about how best to respond in love to those around us, and the other about the efforts to save one of God’s smaller creatures from extinction – and, if you please, there was one very tenacious rainbow out the window.

It was as though God was sharing a joke with us.  It was as though we were in our own little ark travelling back home to our various areas of concern and ministry with the rainbow accompanying us.  At Shannon it was still with us.  It was still with us at Otaki and Waikanae.  It was still there at Paekakariki.  It was only when we were almost home, when we turned up the hill into Pukerua Bay that we lost it.  All the way from Palmerston North to Pukerua Bay… a rainbow.

You know wherever God’s people are wrestling with how best to care for creation and how best to care for others, there is hope and promise.  There’s a rainbow.  We are working for the Kingdom of God.  We are embodying in some way the hope and promise and challenge of that new order that Jesus spoke of, and that God affirmed through the resurrection.  Like the very first Christians we are engaged in the work of Easter, we are bearers of Easter hope.

You know, wherever God’s people are wrestling with how best to care for creation and how best to care for others, there is hope and promise.  There’s a rainbow.  We are working for the Kingdom of God.  We are embodying in some way the hope and promise and challenge of that new order that Jesus spoke of, and that God affirmed through the resurrection.  Like the very first Christians we are engaged in the work of Easter, we are bearers of Easter hope.