What river runs through your life?

Maybe you lived by it.  Maybe you holidayed beside it.

What did your river teach you? 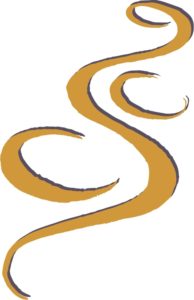 This is the Tawa Union Church logo.  I am told it is a depiction of a braided river.  What does the logo represent for us?  What does it say about who we are and what we value?

I once got talking to a retired engineer, at the mouth of the Waitaki river.  There are fishing camps north and south of the river mouth and he lived in one of them.  He had come down, as I had, to look at the river.  He told me that there is very little river sand in the river.  Because of that boats on the river need special anchors that will grab the gravel sufficiently to hold them.  He recommended a couple of spikes attached to a couple of car suspension springs welded to a short length of railway iron.

He said that only around a third of the water from the river flows above the surface of the shingle that forms its bed.  The rest flows through the shingle which acts like a giant filter.

All large rivers have plumes where they enter the sea.  Often they are obvious after a storm; the water from the swollen river is a very different colour to that of the surrounding sea.  The fresh water plume from the Waitaki extends a long way out to sea.  In the days of sailing ships, ships were able to replenish their drinking water without having to come in to land.

My mother’s old neighbour is a geography teacher at the Girl’s College.  Each year she takes the girls on a field trip along the length of the river.  I asked her where the river begins.  She laughed.  ‘It is usually traced from the beginning of its longest tributary,’ she said.  ‘We say it begins at the Temple Basin at the head of Lake Ohau.’  She gets the girls to observe and measure the river stones along the course of the river.  ‘It is a bit hit and miss, because the three hydro dams on the Waitaki hamper the movement of the stones down the river. 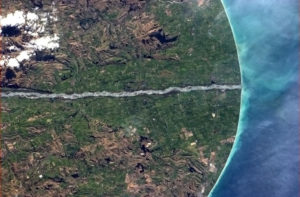 The Waitaki has one of the biggest catchment areas of any river in New Zealand.  Snow melt from the Temple Valley, Mount Cook, Mt Tasman and from further north in the Southern Alps, feeds the glacial lakes of Ohau, Pukaki and Tekapo.  Their rivers flow into the hydro lake of Benmore.  When it leaves Benmore it is finally called the Waitaki, and it passes through two more hydro lakes on its 110 km journey to the sea.  It is a braided river.  It frequently divides and merges along its course.  While its main channel is always deep, some of its strands are stream-like and easily waded.  With all this movement you might think that the overall course of the river would be full of twists and bends.  It is not.  If you look at this aerial photo you can see that the course of the river from when it leaves Benmore is surprisingly straight. 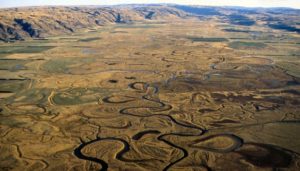 Its straight course is very different from the course of the river that was part of my growing up, the Taieri River.  The Taieri is a river full of sinuous bends.  In fact, its whole course is one great bend.  Its mouth is not all that far from its source as the crow flies.  In rivers that snake like the Taieri, sometimes the beginning of one of its bends is quite close to the end of the bend.  When the river floods it may change its course and carve a short cut through the land separating the beginning and the end of the bend.  When the flood recedes the bend is now cut off from the river.  It has become what is called an oxbow lake.  Given that it no longer has an inlet or an outlet it may eventually dry out.  In the upper reaches of the Taieri River there is a scroll plain where this has happened over and over.

We are commissioning people to be our leaders this morning.  How does all this talk about rivers connect with our life together at Tawa Union Church?  What questions does it raise for us?

I want to draw your attention to three areas that might bear our consideration.  You may have others.

1)The first is to do with habitat.  Braided rivers are full of shingle islands.  These islands lying within the riverbed between the strands of the river teem with insects.  This makes the islands an attractive habitat for our native wading and water birds –  oyster catchers, banded dotterels, wrybills and the rare black stilts.

And the river isn’t just home to the waders.  I knew someone years ago who did some bird counting for DOC along the Waitaki.  He came back with an incredible photo of a New Zealand falcon.  He had unwittingly got too close to its nest and it buzzed him.  He said he could feel the wind from wings on the top of his head.  He held his ground and when the falcon came again he took the photo.  Its wings were fully spread as it pulled itself up from its dive, just avoiding him.

These precious habitats need to be considered when it comes to management of the water ways.  Changes in water flow can lead to increases in weeds.  It may also mean that predators like wild cats and rats and ferrets can reach nests and young birds more readily.

What are we doing to identify and nurture the precious life that exists along and between the strands of our TUC water way?

2) A place of constant movement and change   Instability and change are inevitable features of braided river systems.  These river systems are in constant movement.  Small shingle bars appear and disappear as river channels shift and water flows vary.  Birds that nest in these areas have adapted to these changes.  For instance, many of these birds do not build elaborate nests, so they can rebuild them quickly if destroyed by flood.

How lightly are we holding things?

Are we living expecting things will change?  Because on a braided river they certainly will.

Along a braided river the different water courses within the river bed are always moving in and out of each other.  But the overall course of the river is remarkably straight; it is clearly heading in the same direction.  At TUC we are very proud of our different strands – different services, different programmes for different tastes and needs.  We are good at recognising difference and making space for it.   But how good are we at connecting and reconnecting and at moving together across the strands?  Are we only this wonderful community because we don’t see much of one another?  If that were so it would be a poor sort of Christian unity, and it would only pay lip service to our diversity as well, because we would never be getting close enough to really get to know our differences.

Our Tawa Union Church logo has a pleasing balance to it, with the curves on either side of the main stream suggesting alternate strands.

Does our logo look closer to a river with ox bow lakes or a braided river/ Or, more importantly, are we acting like a braided river or are we simply making ox bows and a scroll plain?

When did you last have a meaningful interaction with someone outside of the group you usually relate to in TUC?  What are you going to do about that?