The second person I want to talk about in this series is a woman called Clara Celestia Hale Babcock.  She holds a significant place in the Christian Churches’ tradition.  She was born in 1850, a little over a hundred years after Susanna Wesley died.  She was an American, born in Ohio, the daughter of a Methodist preacher.  Her father died when she was too young to remember him.  From an early age she was interested in the Christian Temperance movement.  This was the movement whose response to alcohol abuse was to try to outlaw the manufacture and sale of alcohol.   She met and married Israel Babcock in 1865.  She and Israel had 6 children, though only 2 of them survived into adulthood.

The pair of them joined the Christian Churches movement in 1880 after hearing an evangelist at a revival meeting.  Clara was active in women’s civic organisations, particularly temperance ones.  She was gifted, intelligent communicator and was in demand as an evangelist and a temperance speaker.  In 1888 she came to lecture about temperance at the Christian Church in Erie, Illinois.  They liked her so much that they asked her to stay as their pastor. 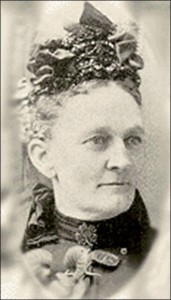 So Clara Babcock became the very first woman in a recognised denomination to be ordained to an extended ministry in a congregation in the United States.  She was a very successful evangelist during the period of what is called the Second Awakening.  It is said that she baptised 1502 people over the course of her ministry.  Her ordination and those of the women who followed opened a fierce debate within the Christian Churches movement.  It was one of the factors along with the place of musical instruments and other essentials of the faith, that eventually in 1906 caused the movement in the States to split into the more conservative Churches of Christ and the more open Christian Churches/ Disciples of Christ movement.  Today in the United States the Disciples of Christ has a woman leader who is in her 2nd term of office, and the Churches of Christ are still debating the validity of women preachers.

Paul’s statement in Galatians that there is neither male nor female in Christ was central to Clara Babcock’s understanding of the validity of her ministry.  When it was questioned she simply pointed to what she did.  Here is what she says about one of her years at Thomson Illinois.

‘The visible results of my work are 96 additions – 38 heads of families, 8 from the Methodist Episcopals, 6 from the Baptists, 9 reclaimed; preached 240 sermons, 16 funerals, 12 weddings, 470 visits made, 1500 miles travelled to and from my labour.  I am currently in perfect health and I haven’t missed an appointment in over four years’
Perhaps that last remark was directed at those who argued that a woman’s constitution was unsuited to pastoral ministry.  Like Susanna Wesley it seems she had a tremendous capacity for work.

Clara Babcock held a number of pastoral positions in Illinois and Iowa and South Dakota over her 35 years of ordained ministry.  She was involved in active ministry right up to the end of her life.  She died in 1924.

But I discovered something that shocked me about her when I was reading through old newspaper clippings.  One recorded that her funeral service was packed and that Women’s club, the Ladies Aid Society and the women’s Auxiliary of the KKK attended in a body.  Later on it said that the Erie KKK escorted the funeral procession to the cemetery.  Did KKK mean what I thought it did?  It appears so.  ‘Should I be talking about her at all?’ I wondered.  I started to read a bit around the women’s auxiliary of the KKK in Illinois at that time.

In 1919 Abolition came in and the temperance movement that Clara Babcock and many from the churches were part appeared to have won.  What happened of course was that Abolition was extremely unpopular and the bootleggers arrived and the mob started to make a lot of money out of illegal grog.  Those of you who have been watching the Boardwalk Empire series on TV will have some inkling of what went on.  There were law and order issues.  There were very few blacks in Illinois; the KKK at that stage was more anti catholic and anti-newcomers from Europe than anti Black.

The Klan styled itself as patriotic upright white Protestant American, upholders of morality and community standards.  Perhaps that’s not all that different from what Klansmen do today, but the real difference is that in the early 1920s they had wide general support in the community, especially the church community.  They seemed to be on the same page.  There were alliances that we would not be at all comfortable with today with the benefit of hindsight.  Clara was a woman of her time and it would appear that through her temperance associations she had these other less desire able connections.

On a more positive note one of her obituaries reads, ‘Her life, her work in Erie and elsewhere is the most fitting and lasting eulogy that could be written of this noble woman.  Beloved by the community she was always a welcome visitor to their homes or social gatherings.  She was always ready and willing to assist in any undertaking for the good of the community.’  Another of her legacies was that there were at least 15 other women who were ordained as preachers either directly or indirectly through her influence.

When one person is prepared to follow where their God given gifts lead them, they open up space for others to do likewise, and the church and the community are the richer for that.  Both Clara and Susanna Wesley illustrate that.

Who has made space for you to develop your God given gifts?

Whom have you made space for so that they can develop their God given gifts?