The first railway line out of Wellington went via what is now the Johnsonville line.  The line was put in by a group of Wellington business men.  They were impatient with governmental procrastination.  They could see that a railway line north was critical to the economic future of the region, and so they formed the Wellington Manawatu Railway Company.  The line went beyond the current Johnsonville line down through Glenside fairly much along the current motorway alignment to Tawa.  By 1885 it went as far as Paramata, linking the Wellington and Porirua Harbours.

In 1908 the company was bought out by the government.  The Main Trunk Railway through the North Island had just been completed and the Wellington Manawatu Railway Company line became the southernmost section of it.

I don’t know whether you have travelled the Johnsonville line.  It is a windy route around the northern hills.  There are seven tunnels on it and a number of fairly tight bends – which, I gather, is why they are having trouble with noise on it from the new Matangi units.  All going well it took 45 minutes to travel from Wellington to Tawa along it.  While the line no doubt served the needs of the inner northern hill suburbs it was a circuitous route out of Wellington for freight trains and passengers going north of Wellington.

A proposal for a tunnel through the hill to shorten the route was being put forward as early as 1913.  World War 1 stopped the proposal going any further and it was 1923 before any action was taken on it.  Tenders were put out for the two tunnels that would need to be built.  The idea was to use New Zealand contractors for the first and shorter of the tunnels, and to use experienced overseas contractors for the long tunnel.

The local contractor failed to get going on the job and the overseas tenders were too high, so the Public Works Dept decided it would just have to do the job itself.  There was a lot of infrastructure to set up before the tunnels even began.  It wasn’t until 1929 that they began the actual tunnelling.  They began by drilling from both ends at once, and the initial holes progressed at a rate of around 18 metres per week.  That initial hole was then enlarged, reinforced and lined – a slower task that went at the rate of around 13.5 metres per week.

While the tunnels started in hard stable rock, it was not long before the tunnellers met broken rock and underground streams.  The opening of Tunnel No 1 is on the Wellington fault line and the rock had splinter faults that the geologists had not been aware of.  It was hard and dangerous work.  As well as the tunnels, ventilation shafts and service tunnels had to be drilled.  Midway through 1934 the tunnels were handed over to the Railways Dept to lay the track and to put in the electrification.  Electrification was necessary because the tunnels were too long for steam engine to negotiate safely.  Three years after the handover trains were regularly running through the tunnel.

The longer of the two tunnels is over four kilometres long.  When it was built the Tawa No 2 tunnel was the second longest tunnel in New Zealand- the one at Otira being the longest.  Today Tawa No 2 is still the 4th biggest double track tunnel in New Zealand.  Once it was in use, Tawa people could get into town in around a third of the time that it had previously taken.  In the long run that was to have a profound affect on the shape of this suburb, and on the sorts of people who came to live here. 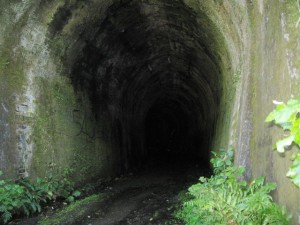 I want you to think about tunnels – not so much the natural ones, but the human made ones.  What are tunnels? Why are they built?

Tunnels like those are a way of making a connection between one place and another, over having a route through one almighty weight of obstruction.  Thinking of tunnels in those terms started to sound a bit like Easter to me.

The events of Easter can be thought of as God making a route through one almighty weight of obstruction….  Our angst, our hurt, our wilfulness, our suspicion, our fear, our hatred, our pride, our denial, our self justification, our self absorption, our lack of care, our small mindedness, our unkindness, our thoughtlessness… it is quite a mountain.  But through Jesus Christ God builds a tunnel, opening up access to himself for us… drawing us to him in love – the same challenging, fierce love that shone through his Son, Jesus Christ.  The God of Easter longs to connect with us.

The God of Easter also invites us along to continue that reconciling, connecting Easter work.  Sometimes it will take us to surprising places and lead us to startling conclusions, just like it did to Peter and the leadership of the Jerusalem church.  It got them putting things together that they had thought could never go together, and yet the Spirit of God was obviously in the connection.  Who would have thought that God was concerned with that, or that God was wanting to connect with them!

Those main Trunk tunnels on the Government deviation changed things for people up the line and this access that we have to God changes things too.  It changes things for us.  It connects us with God’s passion and purpose in this world.  It hauls us into a community that is greater than we had assumed it would be and it wakes us up to a vision beyond anything we had imagined.

Rails Through the Valley: the story of the construction and use of railway lines through Tawa, Bruce Murray and David Parsons, Tawa Historical Society, 2008, Tawa.