I have talked about a couple of women who were significant influences in the Methodist Church and Disciples of Christ/Christian  Churches – Susanna Wesley and Clara Celestia Hale Babcock. 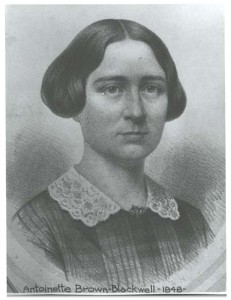 While I was trying to figure out which Church of Christ was the one in our Associated Churches of Christ family tree, I came across the website of the United Churches of Christ of the USA.  It is not part of the Tawa Union Church family, but it is related to the Congregational Church, which is one of our NZ UCANZ partner churches.  It was here that I began to unearth the story of Antoinette Brown Blackwell.  It’s a fascinating story of a woman whose faith spurred her on to engage actively and publicly with many of the key social issues of her day.  It’s a story that deserves to be told.

Antoinette Brown was born in Henrietta, New York, in 1825.  Her parents had a farm.  Antoinette was the seventh of their ten children.  Antoinette’s grandmother would read her grandchildren Bible stories and Pilgrim’s Progress.  Antoinette’s parents joined the throngs at Christian revival meetings.  The family attended a Congregational Church.  Antoinette had a keen sense of God from an early age.  She was admitted as a full member of her church at the age of nine.  One story goes that when she was eight she told her Sunday School teacher that she wanted to be a minister.  Her Sunday School teacher promptly told her that girls couldn’t become ministers- full stop.

From the sounds of it she was never a girl who fitted the standard mould.  She disliked needlework and other feminine pursuits, preferring to help out with the traditional boy’s tasks around the farm.  Her parents recognised her individuality and her intelligence and were supportive of her.  It is said, that her mum at one point pinned a white ribbon to the inside of her collar as something for her to hold on to when others criticised her or did not understand.  Her father would pay her to do threshing so that she could earn money to further her studies.

When she finished school she taught for a while to save money for higher education.  Many tertiary institutions in her day would not take women students.  She found one that did – a Congregational college in Ohio, Oberlin College.  When she completed her two year course in literature she applied to be admitted to the college’s theological course.  While the college might have been happy to admit women into a number of its courses, theology was men only.  And, obviously, that had to be so, because ministers were men only.

After some determined lobbying (Antoinette was articulate and persistent) the faculty grudgingly agreed to admit her to the course.  However they made it clear to her she wouldn’t receive any recognition for her studies -no degree.  She also had to get special permission from her teachers to be allowed to speak in class and from the Theological Literary Society to be able to present essays.  Even so she managed to get some of her exegesis printed in the college quarterly magazine (with a disclaimer from one of her teachers).

Antoinette was a very gifted speaker, a clear thinker and a tenacious campaigner.  They may have tried to hide it with snipes and condescension, but she would have been the terror of the theology department.  She completed her theological studies in 1850.  As promised she received no degree.  It took a year of lobbying before the Congregational Church relented and gave her a licence to preach, but they refused to ordain her.

In her time at Oberlin College she had become more and more active in the anti-slavery, temperance and women’s rights movements.  These interests saw her lecturing and preaching at a number of churches, halls and conventions.  After lecturing in South Butler, New York, the First Congregational church there decided to call her as their minister.  She was ordained there in September 1853.  Two months later she became the first woman to officiate at a wedding in the USA.  That same year she got thrown out of the World Temperance Convention in New York because she was a woman and had had the temerity to try to speak.  On top of this that year she was also a signatory to what was to become one of the important early women’s rights documents in America – ‘The Just and Equal Rights of Women.’

She was in the South Butler parish for less than a year.  There were financial issues with the church, she had some health issues and she was finding it increasingly difficult to fit within the constraints of the Congregational Church.  1855 saw her working as a voluntary community worker in the prisons and ghettos of New York City.  A series of newspaper articles written out of this experience were gathered in a book- ‘Shadows of our Social System’.

In 1856 she married Samuel Blackwell.  Samuel’s sister, Elizabeth was the first woman in the USA to graduate from Medical School.  Samuel’s brother, Henry, was married to Lucy Stone, an old friend of Antoinette’s from Oberlin College.  Lucy, like Antoinette, was a prominent feminist.  It was an extraordinary extended family.  The three women came to be known as the Blackwell women.  Samuel and Antoinette had seven children, two died in infancy.  For much of the next twenty years she concentrated on bringing up her family, writing and her work in the suffrage movement- the movement that laboured to get women the vote.  She had a breadth of interests.  She was in brief correspondence with Charles Darwin and wrote a response to his evolutionary theory.  She was one of very few women at the time to be elected to the American Association for the Advancement of Science.  She also wrote a book of poems, ‘Sea Drift’. 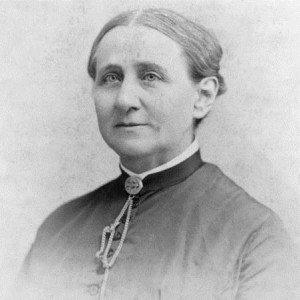 By the end of the 1870s she was beginning to get back into public speaking.  Around this time she and her husband reconnected with organised religion.  She became a Unitarian minister, though it was not until 1903 that she served as a minister of a Unitarian Congregation.  Mostly she concentrated on lecturing.  Her main focus by this stage was women’s suffrage.  She recognised that gaining the vote was only a part of what was needed to improve women’s status in society.   She saw that having the vote would have little impact if it wasn’t accompanied by real opportunities for leadership for women.  Only then would women be able to speak for themselves in the places that mattered.

Unlike a number of her peers she did not see Christianity as an impediment to women’s rights movement.  It was its out dated interpretation based on poor exegesis and fossilised in church institutions that was the problem.  Antoinette Blackwell was active in women’s suffrage associations right up into her eighties.  She was a legend in her own lifetime.  She lived until she was 95 years old and was one of only a few of the pioneers of the suffrage movement to still be alive by the 1920 presidential election, the first US election in which women were allowed to vote.  She died in 1921.

Antoinette Brown Blackwell was a woman of considerable intelligence and talent.  She was a woman who was ahead of her time and that got her into strife with those who wanted to preserve things as they were.  She found too much to challenge within the organized church, and it is unsurprising that she spent so little time in pastoral ministry.  She would have been uncomfortable company, in part because she drew attention to uncomfortable truths.

Her most fruitful ministry was out in society.  Her faith in God led her to fight what she saw as unfair and unjust.  She had a heart for those who were at the bottom of the heap and she used her gifts to advocate for them.  She was a perceptive critic of her society.  She could see that the injustice that she and others ran up against was imbedded in the structures and attitudes of her society.  Effective change wasn’t simply going to be a matter of confronting tyrants.  The tyrants were merely a symptom of the system.  The system was what needed to be challenged and transformed.  And that was the work that she went at with courage, tenacity and intelligence.  That was how she fulfilled God’s call on her life.