Ann Henry was born in the Deep South in 1879.  Her father was a saw miller.  She was educated at the local school and then at Riverton District High School.

She became a teacher and was heavily involved in Sunday School and Bible Class movements.  By the turn of the century she had moved to the North Island, and in 1913 she was appointed as the first matron of Presbyterian Manunui Boys’ Agricultural College which was close to Taumarunui.

She went on from there to train as a deaconess.  During that time she made a start on learning Maori.  At the beginning of 1917 she was appointed by the Presbyterian Church as a missionary to Tuhoe.  She was to be based at Ruatahuna.

Tuhoe leaders had been petitioning the government to establish a school to serve the area for a number of years.  Relationships with Tuhoe and government had been rocky.  Things had come to a head just a year before Annie’s arrival in the district.  Fearful of what was going on at Maungapohatu in the Ureweras and suspicious of the following that the Maori prophet Rua Kenana had drawn around himself, government troops had stormed the pa and arrested Rua and taken him off to prison.  Rua’s son was among the fatalities of the day’s action.

When Annie turned up with a companion, Ms Monfries, at Rotorua, they were met by educationist and Presbyterian, William Bird, who remarked that they must have been from the farthest end of Southland, because no woman living any nearer than that would dream of entering the Ureweras at that time.

Presbyterian Maori mission minutes recorded:- ‘There were two places, Te Whaiti and Ruatahuna where the children run like hares from the sight of a Pakeha; where there are no schools and no other church has even attempted work; where the natives are so poor and so unlearned in the cultivation of their land that in winter they are on the verge of starvation.  Mr Bird assured her that the government would put up a school whenever someone goes in and gathers the children together.’

Ruatahuna was very isolated.  It took the women several days to make the journey in from Rotorua.  They had a car for the first day.  However the roads proved too taxing for it.  The radiator kept overheating, the engine refused to turn over when cranked and they often had to push.  In the end they gave up and walked to give the car a rest.

The next day they had a horse and buggy.  But on the steep winding road the horse was unable to take them and their luggage, so again they had to walk a lot.  The local constable was about to send out a search party when they finally arrived well after midnight.

The women had been offered a three bedroom whare in which to set up their new school.  Two of its rooms had dirt floors and it had holes for windows.  By this stage Ms Monfries was ready to go back home.  Even Sister Annie’s optimism was severely challenged when the local rats visited them during the night.  The two women lost no time finding alternative accommodation in the morning.

The arrival of two white women created a stir.  Many in the community had never seen a white woman.  One later recorded that he was quite young when he saw Sister riding along.  He got such a shock that he jumped the farm fence and tore off into the bush.  He thought that he had seen a ghost. 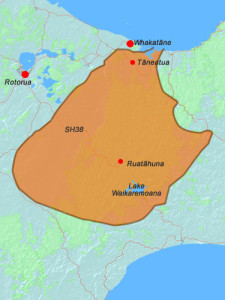 A year later, Rev John Laughton arrived at Ruatahuna.  Annie and John Laughton were to forge a firm friendship and a close working partnership.  Laughton had been posted to Rua’s stronghold, Maungapohatu, to set up a school and do other mission work there.  Rua had by this time returned from prison.  While John Laughton was waiting for permission to proceed there, he and Rev Henry Fletcher with the help of local Maori built a schoolhouse out of palings for Sister Annie and her pupils.

John Laughton had no teaching experience.  Sister Annie accompanied him to Maungapohatu and helped him to set up the school there.  She continued to keep an eye on its progress and would cart in supplies for it when she visited.  It was 30 kms from Ruatahuna to Maungapohatu.  On one occasion she famously took over a big school blackboard by packhorse for Laughton’s school.

Sister Annie’s school roll grew rapidly as people found out about it.  In its first year its roll went from 51 to 72.  To keep on top of the class numbers the adult students were split off into a night school.  Sister Annie won the hearts of those whom she worked among.  She took a real interest in her pupils, and would arrange for the gifted ones to receive access to further education, sometimes paying their fees herself.

The closest hospital to Ruatahuna was two days away in Rotorua.  Sister Annie was often called upon by the community to deliver babies and care for the sick.  She nursed people through the terrible flu epidemic, and through outbreaks of whooping cough, and typhoid, and other illnesses.  It was said that she was also quite skilled at pulling teeth.

From early on she held religious services.  Te Kooti had brought the Ringatu faith to Tuhoe.  Rua Kenana’s belief system was an offshoot of Ringatu.  Both were a syncretism of traditional Maori belief and Christianity.  Ringatu kept the sabbath and also a prayer day on the 12th day of the month.  Sister Annie would attend these services, and after them she would invite everyone to attend Presbyterian services with her on the Sunday.

She built some close relationships with the spiritual leaders of the Urewera.  They recognised her generosity and kindness, and her commitment to working for the good of their people.  She in her turn had a genuine respect for who they were as people.  She was to describe Rua Kenana as a ‘big hearted man, kindness in itself, a very intelligent man always ready to help.’ In 1927, after she had been working in the area for around a decade she attended a large gathering of Ringatu in Rotorua with a colleague.  It was recognition of her mana that the two of them were invited to give an address during the main service of that gathering.

Sister Annie had a heart for young people.  She had two favourite songs she would teach them.  Jesus Loves Me and I’m H.A.P.P.Y..  Both are still sung at tribal gatherings around Ruatahuna.  Often I’m H.A.P.P.Y.  was followed by a Sister Annie variant, I’m L.O.V.E.D.

While she never married, she adopted a couple of Maori children.  One had contracted polio and was paralysed below the waist when he came to live with her.  She arranged for him to undergo surgery and rehab at Rotorua Hospital.  This meant he could walk with the aid of crutches.  The second, Rata, died in his teens of tuberculosis.

In 1929 acknowledging her standing among the people of the area, she was made a Justice of the Peace.  She was one the first women in New Zealand to hold that position.  She was a diehard rugby fan and was probably the first woman in the world to be the president of a rugby club – the Ruatahuna Rugby Football Club.

When she retired in 1948 she had been serving the people of the Urewera for 32 years.  Once she moved to Ohope Beach she continued to keep an eye out for her people.  She would regularly visit Tuhoe patients at Whakatane Hospital.  In their turn the people of Ruatahuna kept her in firewood.  In 1951 she received an MBE for services to the Tuhoe people.  She died in 1971 aged 92.  Her tangi at Ohope Marae was huge.  Afterwards the funeral cortège visited numerous Marae on the way to her final resting place at Ruatahuna.

Annie Henry was a woman who lived a really significant life.  She is a bit of a legend in the PCANZ.  Yet, paradoxically, she did it by investing deeply in a community and a place that was in most people’s judgment very out of the way and insignificant.  Like her master Jesus, she made friends among people whom others were frightened of, or didn’t understand, or couldn’t be bothered with.  She was a woman of boundless energy and grit, and great kindness.  She was a proficient organiser.  She evidently had a good sense of fun.  I also have it on good authority that she could be crabby when she was tired.

When I was researching this sermon I unearthed a couple of Tawa Union connections with Annie Henry.  She died only 44 years ago.  I found that there are two members of our congregation, at least, who have been in the same room as her.  One is Ron Bichan.  He confessed to being in the same room as her once.  He said she was on one side of the room and, by this stage, quite famous and highly respected, and he was on the other side of the room and not at all famous.  He did however know her colleague, John Laughton, quite well.

The other person from our congregation to have the distinction of being in the same room as Sister Annie is Mavis Duncan.  Mavis in fact shared several rooms with Sister Annie over a couple of years.  When Mavis was in her early teens she lived for a time with Sister Annie at Ruatahuna and helped her keep house.  She remembers Annie’s son Rata, living in a tent because of his tuberculosis.  From what I can figure out this would have been in the late 1920s.  This house here would have been the one that she shared with Annie Henry. 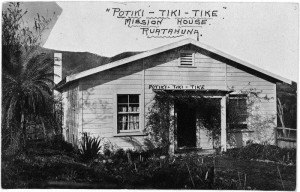 If you want to hear a bit more about Sister Annie and perhaps about how Mavis ended up delivering a baby, I suggest you ask her.