Go therefore and make disciples of all the nations, baptising them in the name of the Father and of the Son and of the Holy Spirit, and teaching them to obey everything that I have commanded you.  And remember, I am with you always, to the end of the age.

Matthew’s Great Commission has been an important and formative text in the church’s understanding of its mission.  Sometimes, I think, those who are enthusiastic users of it could be a bit more imaginative and expansive on what that Christian discipleship entails. 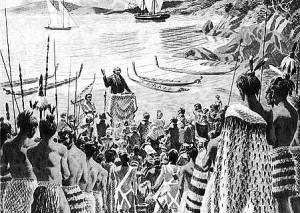 It was the text behind John Mott’s cry ‘The evangelisation of the world in this generation.’  The Student Volunteer Movement that John Mott led was an ancestor to the Student Christian Movement and the Tertiary Students’ Christian Fellowship.

Another of the important texts on mission is Jesus’ statement before the home crowd at Nazareth, of what he was on about.

The Spirit of the Lord is upon me, because he has anointed me to bring good news to the poor.  He has sent me to proclaim release to the captives and recovery of sight to the blind, to let the oppressed go free, and to proclaim the year of the Lord’s favour.

This statement about God’s mission in the world being about the restoration of social and spiritual wholeness, healing and release proclaimed and modelled by Jesus and fulfilled through him, is perhaps the favoured mission text of today (in theory at least).

I’ve been reading a book lately that takes Luke 10: 1-12, the passage about the sending out of the 70, and suggests that we would do well to reflect on what it tells us, about how the church should go about participating in God’s mission.   I haven’t made up my mind about whether the text can bear all that this writer hangs on it, but he makes some interesting and challenging observations that are worth thinking about.

The author’s name is Alan Roxburgh.  His basic thesis is that ‘the mission of God’ is the centre of the gospel and the central concern of Jesus.  It is not about the church, he says.  It’s not about church planting or church growth or healthy churches or any other form of church survival.  Communities that are shaped by the Christian gospel are called first and foremost to be people who are committed to partnering with God in God’s mission to the world.

That partnership with God in God’s mission may sensitise us to pastoral needs, justice issues, spiritual needs, conservation concerns, to places that are doing good work and could do with a helping hand.  It may draw us to pray, to speak, to do, to share resources, time, expertise, something of our own story, something of the Christian story.   Whenever our sense of the grace, love, justice and faithfulness of God motivates our responses to the world around us we are partnering God in God’s mission; we are doing kingdom work.  We need, Alan Roxburgh says, to rediscover that the gospel is the hope for all human life and for the creation that surrounds us.

The gospel of Luke was probably written in the last quarter of the first century.  It was written with Gentile congregations in mind.  By the time the gospel was written Jerusalem had very likely fallen to Titus who would soon become the emperor of Rome.  With its fall those who had been associated with the most Jewish of the Christian communities had been scattered or had perished.  By 75 AD there would have been a good number of 2nd generation Christians among those to whom Luke was writing.

Roxburgh believes that Luke wrote to encourage Christians who were having a crisis of faith.  The expectation of the earliest Christian communities was that within a short time Christ would return and the Kingdom of God would come in its fullness and the kingdoms of the world (including the superpower of Rome) would come to an end.  As time went on this expectation was needing to be looked at again.  Christians were a minority, living in countries that had been occupied by the Roman army and incorporated into the Roman Empire.  Life was not always easy.  It was not uncommon to be subjected to harassment and discrimination.  It was tough and costly believing and giving allegiance to an alternative kingdom, when the signs of the power of Rome surrounded them on every side.  The Roman Empire seemed as entrenched as ever.  Was the cost of being different too great?  Why was God taking his time in bringing things to a close? What was God up to?  Who was really winning?

This is the context of Luke’s audience.  In the gospel itself the story of the sending out of the seventy is surrounded by stories that indicate that the gospel from its beginning had a mixed reception, and also that it has never been easy to follow Jesus.  In fact in the section before this passage Jesus’ words are more discouraging than encouraging to those who register expressions of interest in following him.  ‘You’ll be living on the margins.  It will demand your undivided allegiance.’  It is clear, too, that the highly regarded and well known were disproportionately absent from Jesus’ band of disciples.  All in all they were a pretty ordinary bunch.  ‘Thank you God,’ Jesus says, ‘that you have revealed these things to children and not to the smart and savvy.’  Luke’s audience will have recognised something of themselves and their experience in all these things.

Jesus has set his face toward Jerusalem.  He sends 70 of his followers out ahead of him into the places that he will be passing through.  They are to travel light, so light that they will be forced to depend on whatever hospitality is offered to them- no purse no bag no sandals.  (‘Comb and toothbrush and no extra luggage’- The Message.)  They are to stop where they are first welcomed.  They are not to move around looking for the best place to stay.

This is a very different approach to mission from the default of most Western churches.  Here the followers of Jesus are recipients of others’ hospitality.  They are not creating a programme or responding to what they guess is a need or gap in services in the community.  They are not creating a dependence on themselves for a service, and hoping by that that people might stick around.  They are not even extending hospitality with no strings attached.  Instead they are the powerless ones, dependent on those who have allowed them to move in and live alongside them, sharing in the work of the household and sharing food at their table.  This is the sort of space where genuine conversations, free from church agendas can take place.

Alan Roxburgh paraphrases, ‘If you want to discover and discern what God is up to in the world just now, stop trying to answer this question within the walls of your churches.  Like strangers in need of hospitality who have left their baggage behind, enter the neighborhoods and communities where you live.  Sit at the table of the other, and there you may begin to hear what God is doing….  Part of Luke’s response to his audience is that they will rediscover the meaning and shape of the gospel as they enter the towns and villages where the Spirit has sent them to live.’

Roxburgh reflects that the church in this passage is not in a gathering of like minded people in a scheduled religious meeting, it is in the living spaces and working spaces of people who are largely outside of those meetings.  It is sitting at their tables, listening to their stories, breaking bread with them, and entering into a human dialogue that is not a well- rehearsed sales pitch.’

Now there a lot of us at Tawa Union Church who have or have had very strong links and connections with our communities.  We have an older generation here, in particular, who were instrumental in setting up some of the infrastructure of our suburb.  Many of us too have worked in community oriented professions or in the public service.  And others of us have worked with integrity in the private sector.   We have a strong tradition of community service in this church and in fact in the suburb. 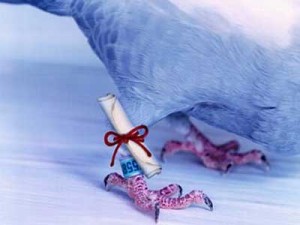 What we do sometimes lose touch with, though, is a sense of being sent.  The 70 were sent out by Jesus; that is what gave their journey its purpose.  It wasn’t just a billeting experience for their own development, or to do a bit of good.  Jesus had sent them to speak God’s word of peace and wholeness, to heal the sick and to announce the good news of God’s kingdom- a very different sort of establishment to the Roman Empire.  We need to recover our belief that God has sent us to be part of the communities that we connect with.

God hasn’t sent us there to interject with trite religious formulas or give some Christian sales pitch.  God has sent us there to rub shoulders with those who are in those communities, to work alongside them, to listen to their stories, to share coffee with them and enter into genuine dialogue.  As we do that and reflect on our own stories and the stories of God’s people, we may notice what God is up to in that place and discover our ministry there.  It is our sense of being sent that opens our eyes to see our life’s journey and our work, paid and unpaid, as a calling.  When we wake up to our life as a calling, it is amazing how often we catch sight of God.

The 70 came back to Jesus bubbling with all that had happened, full of stories of what God had done through them.  Jesus says, ‘That’s great, but the real triumph is not your authority but God’s authority over you and God’s presence with you.  It’s not what you do for God but what God does for you- that’s the agenda for rejoicing.’ It is our ongoing awareness and celebration of God’s kindness and grace towards us that gives our ministry balance and keeps it genuine.